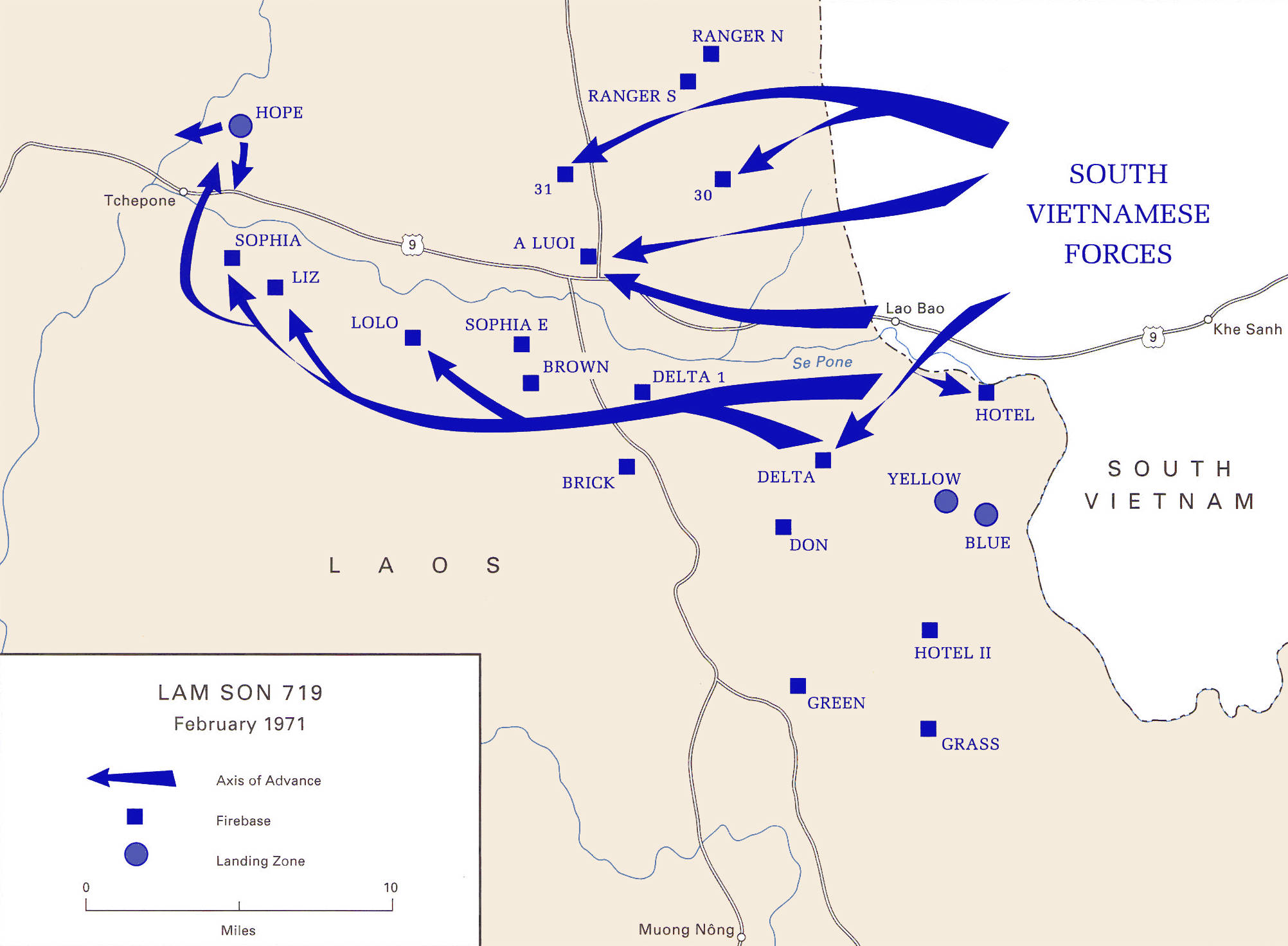 During February and March of 1971, the Rattlers and Firebirds participated in the largest operation of the Vietnam war: Operation Dewey Canyon II and Lam Son 719.

The operations began with a phase called Operation Dewey Canyon II, in which the 1st Brigade of the U.S. 5th Infantry Division cleared the routes inside South Vietnam to Khe Sanh and facilitated the movement of South Vietnamese forces to attack positions adjacent to the Laotian border. Additionally, from Khe Sanh and surrounding fire support bases, some 9,000 U.S. troops provided logistical support to the ARVN and long-range artillery fire into Laos in support of the South Vietnamese attack.

The primary objective of Lam Son 719, was to destroy supply dumps and sever the Ho Chi Minh Trail, the logistical corridor running through eastern Laos from North Vietnam south to Cambodia. The ARVN forces were to seize Base Area 604 west and south of Tchepone, a small town located at a strategic junction of supply routes 42 kilometers from the border with South Vietnam. After securing Tchepone, the South Vietnamese would, for the remainder of the dry season, interdict the trail and destroy logistical facilities in the area.

Several South Vietnamese operations were named “LAM SON” after the birthplace of a Vietnamese hero who led an army to expel the Chinese from Vietnam in the 15th Century. The use of “719“ signifies the year “1971“ and the battle area along Route 9.

Because of the Cooper-Church Amendment passed by Congress in late 1970, U.S. ground troops and advisers were prohibited from entering Laos. However, U.S. helicopters would support the operation and U.S. fighter-bombers, fixed-wing gunships and B-52 bombers would provide air support. While opinions vary widely on the success or failure of the operation and the losses sustained by both sides. On the positive side, the South Vietnamese reached Tchepone and attained all of their objectives, they failed to hold it and thus failed to interdict the Ho Chi Minh Trail for more than a minor interruption. The one thing that can be stated is that the airmobility concept proved to be an unqualified success.