The Loss of Firebird 91 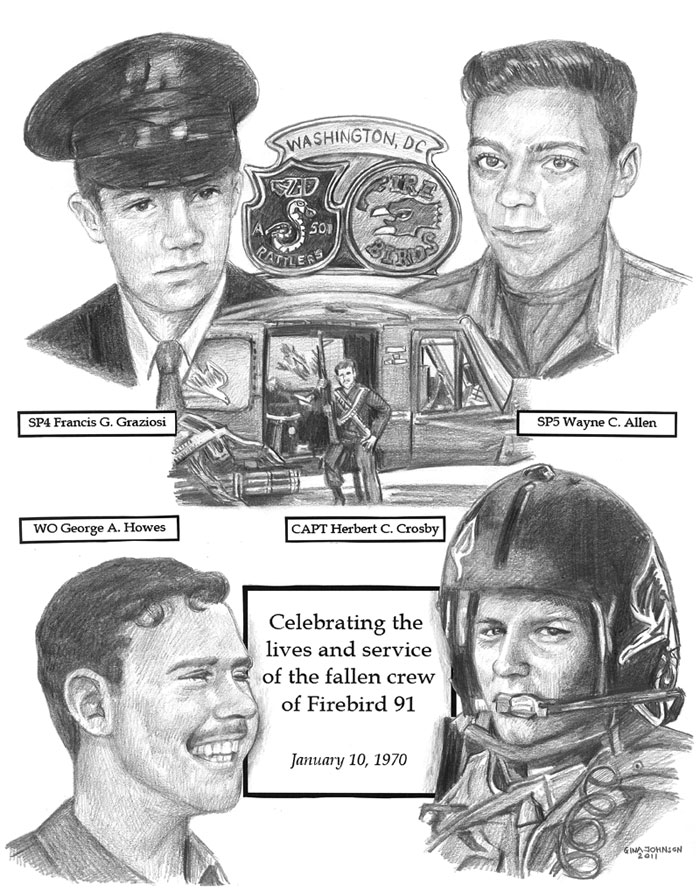 The drawing above (© copyright Gina Johnson, 2011) was done by Gina Johnson, who has drawn all the service KIA from Iraq and Afghanstan from Massachusetts.  (Google: "Gina Johnson Artist," for more information about her work). The image was sent to us by Fred Shine, who as a high school friend of Wayne Clouse Allen.

On January 10, 1970, a flight of three Firebirds was on a mission near Tien Phouc. The flight departed Tien Phouc at about 1:00 p.m. to return to our base at Chu Lai. The flight was lead by Firebird 91, crewed by CPT Herbert Charles Crosby, WO1 George Andrews Howes, SP5 Wayne Clouse Allen and SP4 Francis George Graziosi. Because of the weather, the flight elected to fly on instruments rather than flying visually at low level due to known enemy positions. At about 1:15 p.m., the flight changed radio frequencies to contact Chu Lai Approach Control. Firebird 91 was never heard from again. The aircraft and crew were lost with little to explain what happened. Repeated searches, initially hampered by weather, turned up no evidence of the aircraft. The crew was reported as missing in action and were later declared dead by presumptive findings issued between 1974 and 1979.

On March 27, 1991 the remains returned to the U.S. by Vietnam were identified as those of Wayne Clouse Allen.

On June 12, 2006, after more than 36 years, the remains of Herbert Charles Crosby were identified. You can find more information about Crosby at the site dedicated to him.

On June 12, 2006, after more than 36 years, the remains of Francis George Graziosi were identified.

Listed below are other pages with more information about the loss of these men and the subsequent identifications (newest information is at the bottom):

Aircraft Information
The database entry for aircraft 66-00739 including the loss report.
November 1997 Newsletter Article
An article in our November 1997 Newsletter with information from one of the men who was there.
May 2003 Newsletter Article
A request from a woman who wore a POW/MIA bracelet bearing the name of Francis George Graziosi asking for information.
Remembrance Pages
Wayne Clouse Allen
Herbert Charles Crosby
Francis George Graziosi
George Andrews Howes
The Search
The Analysis Report detailing the search for a resolution of the missing men. This report a very detailed accounting of the efforts that were made attempting to find the men and the eventual identification of Crosby and Graziosi.
The Identification Process
The memo from the Scientific director of the JPAC Central Identification Laboratory describing the identifacion of Herbert Charles Crosby and Francis George Graziosi.
Press Release
The Press Release from the Department of Defense announcing the identification of Herbert Charles Crosby and Francis George Graziosi.
Letter from Mary Lou Wade
A letter we received from Mary Lou Wade, sister of Herbert Charles Crosby.
A Grave Site Visit
On January 14, 2007, Vic Bandini and John Wilanski visited Wayne Clouse Allen's grave.
Graziosi's Memorial Service and Funeral
On May 18-19, 2007, Francis Graziosi's memorial service and funeral were held.
Crosby's Memorial Service and Funeral
On May 24-25, 2007, Herbert Crosby's memoral service and funeral were held.
E-mail From Ann Howes
An e-mail we received from Ann Howes.
Firebird 91 Loss from Operations
On January 10, 1970, the day we lost Firebird 91, Tony Jones was working as an Operations Specialist and was recording a taped letter to send home. The tape caught much of what went on in Operations during that time. Here is a a transcript of that tape recording. The transcription was done by Wally Honda.
Howes Memorial Service
The memorial service for Andy Howes was held on August 2, 2011.